From the pages of “The Picayune’s Creole Cook Book”

Just in case you’re still looking for that perfect dish for your Thanksgiving table…this week, I’m going to be posting some of my favorite turn-of-the-century recipes from New Orleans!

First up, your appetizer–Cream of Asparagus Soup. 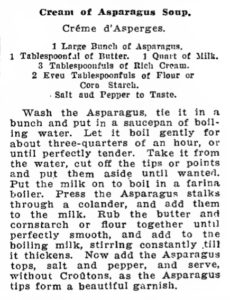 2 Even Tablespoonfuls of Flour or Corn Starch.

Salt and Pepper to Taste.

STEP FOUR requires a “farina boiler”, which I think is the same as a “farina kettle” which looks like this:

Although STEP SIX might sound like you’re making a roux, a roux is always made with exactly equal parts of butter and flour.